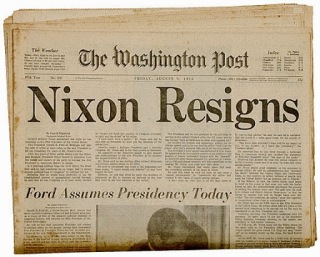 This is probably interesting only to absolute history fanatics and political geeks — like me, of course — but this really impacted my life.

I was 14 and vacationing in Ocean City MD with my parents and my grandparents during that momentous week in 1974.

On the evening of 8/9/74, I chose to stay in the room as the four adults went out for a late dinner… because I wanted to watch this speech live.

I remember sitting on the edge of the motel room bed… fixedly staring at the little TV screen. When I heard President Nixon say, “Therefore, I shall resign the Presidency effective at noon tomorrow,” I actually let out a cheer of victory. Yes, it was a dark blot on our nation’s history… but the removal of this man from office was not a moment for sadness. Rather, it was the first step toward a healing process.

Today, when we hear so many weak-minded people toss around the notion of impeaching President Barack Obama﻿… I wish that those people would take a moment to understand: impeachment is a serious step to be taken only when there is justification due to actual wrongdoing, not because you just don’t like the guy.