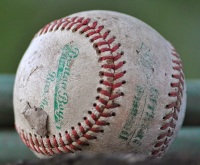 My favorite sport is baseball. I fell head over heels for the game when I was a young boy, and that love affair continues today. There’s nothing like the satisfaction of turning a double play, the crack of a wooden bat as it slaps the ball between two fielders for a base hit, the feel of a leather glove that you spent weeks pounding into shape so it practically became a part of your hand. And then there’s the math! Baseball is all about math: batting averages, slugging percentages, calculating the Magic Number as your team tries to clinch the pennant.

The games themselves can be decided in nine innings… or they can go on and on and on until one team is victorious. You may argue close plays… you may dispute an umpire’s call… but in the end there are clear winners and losers; there are no ties, and the losing team goes home disappointed but anxious for the next game.

My second favorite sport is politics. I fell for that game in my teens but really became a fan in my late twenties. There’s nothing like the satisfaction of watching the election results scroll along the bottom of the TV screen, the crack of a smile on a winning candidate’s face, the feel of the leather chair you plop into after a long and successful campaign…

Meh. Who am I kidding? Politics isn’t fun like baseball, at least not anymore. Politics has become a necessary evil. Our system of government depends on the game of politics, but the game has lost its glory. Gone are the days when elections were a choice between two or more qualified candidates, when the point was to find the best person for the job. Yes, popularity was always a factor. It’s no secret that John F Kennedy’s charming smile was a key factor in his 1960 presidential victory. Dwight Eisenhower stood a better chance of winning than Adlai Stevenson thanks to Ike’s status as a military hero. And let’s face it: any Democrat was destined to win in 2008 thanks to a pair of unpopular wars and a very unpopular financial crisis.

But popularity isn’t enough. The Kardashians have a huge following but I don’t see anyone making the argument that any member of the family should hold elected office. What we need are men and women who have a sense of the huge obligation that comes with accepting such positions. What we need are men and women who understand how important the job is and are willing to accept the responsibilities of the post with maturity and common sense. Unfortunately in recent years our elections are giving us the exact opposite.

Even a casual observer can see that our current Congress is populated with bad-tempered fools and their numbers are growing.  One Senator can place a ‘hold’ on a nomination and prevent his colleagues from taking any action, even if the other 99 are in favor. In the House, a committee chairman can simply refuse to call for a vote on a measure… and legislation dies, even if a majority of representatives want to vote for the plan. Do Americans find it entertaining to have their elected officials act like petulant children rather than adults who can work together to accomplish common goals? In many ways, I think the answer is ‘yes’. We are going through a phase where both politicians and pundits have tapped into a well of anger and fear and will do whatever it takes to keep those emotions flowing. My guess is most of these people couldn’t tell you specifically why they are angry or afraid, but their radios and televisions are encouraging those feelings and that’s all the justification they need. So they tend to elect candidates who reflect those same emotions.

Sadly, there’s no simple fix for the problem. In this 24-hour news-cycle world we have created, you’re less likely to find a sensible person willing to toss a hat into the ring. Who among us would welcome the scrutiny? More important, who among us would want to be the target of so much negativity? It’s incredibly easy to plant a false story about an opponent that will quickly take root and command the attention of reporters and onlookers.

America has become the Land of the Uninformed. That may sound ridiculous, with such easy access to information on our computers, tablets, and smartphones. However, what we read and watch is easily tainted… manipulated, distorted, fabricated… so that we may be glued to our electronic devices but we’re not any smarter as a result. For example, there’s a reality TV star who has been able to single-handedly control large amounts of news coverage by merely suggesting that a birth certificate isn’t a birth certificate. Such wild goose chases dominate our radios and televisions, and there is a large audience eager to waste time on this nonsense.

I’m not trying to turn my readers into a swarm of cynics. What I am hoping is to see are larger numbers of people who take the time to filter the news to see what does and doesn’t make sense. The more outrageous the story, the more it deserves the common sense filter. Listen, really listen, to what people are saying. Maybe… one step at a time… we can bring back some civility to American politics.

One thought on “Stuck in the Middle”